Esther Phillips - From a Whisper to a Scream: expanded edition

Digitally re-mastered and expanded edition of this 1972 album from the late vocalist. Justifiably hailed as her 'career' album, FROM A WHISPER TO a SCREAM re-established the Esther Phillips as a prominent Soul and Jazz artist in 1972, starting her most fruitful period as an international chart maker through her five-year association with Jazz industry veteran Creed Taylor's Kudu Records. Originally a chart-topping child star with the Johnny Otis band in the early '50 s, Little Esther battled drug addiction off and on throughout the '60 s during which she achieved some success with 'Release Me' (1963) and 'And I Love Him' (1965).

Esther recorded some critically acclaimed albums for Atlantic before entering rehab in 1969. The sessions for FROM A WHISPER TO a SCREAM in December 1971 found her surrounded by stellar players such as Gordon Edwards (bass), Bernard Purdie (drums), Airto Moreira (percussion), Cornell Dupree and Eric Gale (guitar), Richard Tee (keyboards) and label mate Hank Crawford (on sax on selected tracks). 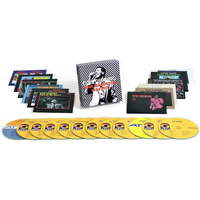