There is desperation and urgency in Fantastic Negrito's new album Please Don't Be Dead. The record sees the Devil around the corner, and each song is a plea to make you aware of what's waiting for you. The artist is screaming at you because he knows what comes next. The album art features a real life photograph of Fantastic Negrito waking up from a three week coma.

His body is shattered, his eyes are staring past you. They're staring at the darkness that awaits. But with his new album we hear the voice of an artist who put that darkness in the rearview. Now he's asking America to do the same. 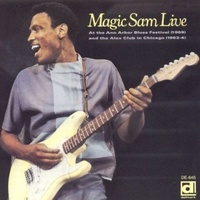