Gil Scott-Heron - The Revolution Will Not Be Televised

Digitally remastered and expanded edition of this compilation of Gil Scott-Heron's best-known works for the Flying Dutchman label.

Originally released to capitalize on the success of Scott-Heron's then-current hit 'The Bottle' and his subsequent signing to Arista, this 1974 compilation has since become the definitive distillation of his early work. Contained within the original 11-track selection were the title track, 'Whitey On The Moon', 'Home Is Where The Hatred Is' plus eight more. The expanded CD version offers a more rounded view of Scott-Heron's work with the addition of nine tracks among them 'When You Are Who You Are', used in a recent television commercial, 'I Think I'll Call It Morning' and the original spoken-word version of 'The Revolution Will Not Be Televised'. By way of a bonus, edited versions of several of his poems are also included. The CD version includes copious illustrations and an extensive liner note. 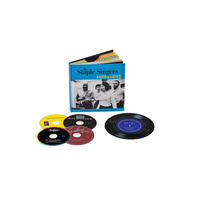