When Herbie Hancock released Possibilities (2005), a collaborative effort that paired the great pianist and composer with a group of pop and rock stocks from the world over, it was obvious the restless master was entering a new phase of his long career. In that context, River: The Joni Letters makes perfect sense. Hancock and his fine band -- Lionel Loueke (guitar), Wayne Shorter (soprano and tenor saxophones), Dave Holland (bass), Vinnie Colaiuta (drums) -- prepare a series of instrumentals and vocal interpretations of the songs of Joni Mitchell.

The vocalists here include those who were inspired by Mitchell, namely Norah Jones, Corinne Bailey Rae, and Mitchell herself on one number (her own recording, Shine, was released on the same day), and some of her peers in the pop world, including Tina Turner and Leonard Cohen. Cohen's connection to the songwriter is direct in that they are both Canadians and both came up playing clubs and venues in the then new "folk" scene. But Hancock understands something implicit about Mitchell: she was never -- ever -- a folksinger. Her compositions have always walked wildly adventurous rhythmic and harmonic terrain.

Indeed, she has played with jazz musicians solidly since the 1970s, beginning with the L.A. record, The Hissing of Summer Lawns, and toured with jazz groups, including the all-star band assembled for Shadows and Light that included Pat Metheny, Jaco Pastorius, Lyle Mays, Don Alias, and Michael Brecker (Shorter played on a number of those dates as well). Indeed, when Mitchell asked no less than Robbie Robertson and the Band to back her on a tour, they had to excuse themselves because they simply couldn't find a way to play behind her. The material here doesn't walk the line between pop and jazz -- something Hancock is very comfortable doing. This is a jazz record with vocals. The album's ten tracks are, for the most part, programmed for a vocal tune, followed by an instrumental. This holds true with only one exception in that the disc's first two songs are vocals. First there's the lovely, spooky, smoky "Court and Spark," sung by Jones, followed immediately by the ethereal yet from-the-gut version of "Edith and the Kingpin," sung by Turner (it should be noted here that she is in fine voice, since she hadn't been heard from in quite a while). In this latter cut, it's a testament to the singer, the writer, and Hancock, how deeply soulful this performance is. Turner is one of the great soul singers, but this ballad lends itself to another kind of reading and is therefore radically reinterpreted here with Turner's trademark phrasing, and the restraint doesn't give up an ounce of the emotion in it.

The instrumentals begin with "Both Sides Now," which is harmonically rearranged by Hancock and indeed feels like it is being played from the inside out. Shorter's meaty yet understated tenor solo is reminiscent of the great tenderness of Ben Webster. It's utterly gorgeous. The shimmering "Sweet Bird" is hiked up a notch and really begins to cook about a third of the way through without losing any of the song's naturally dreamy quality. Again, Shorter handles the lyric lines on his tenor with real grace. Hancock's wonderfully large chromatic interplay in both his chords and right-handed lines from the middle register are achingly beautiful. The final two instrumentals on the set are surprises, but they are placed here, perhaps, because they were inspirational to Mitchell. The first is a fine reading of the Edgar de Lange/Duke Ellington/Irving Mills tune "Solitude," a sweet, tender ballad that nonetheless contains some unusual moments in its drifting structure and in its changes. The latter is Shorter's classic "Neferititi," written while both he and Hancock were with Miles Davis in the second quintet. It didn't sound like this then, but that's the beauty of Shorter's best work: it can be revisioned a hundred times over in so many different ways yet is unmistakably his.

The other vocal performances here are basically stellar. Rae's version of the title cut offers a completely different dimension of her voice. The soul feel is still there -- and she pushes it into the grooves of the tune. But her clipping of her lines at the end, making them so clean -- especially in the way they interact with Shorter's soprano -- is rather stunning. The hinge of the set is Mitchell's performance of a song she wrote with Larry Klein (who co-produced the album with Hancock and has been Mitchell's producer for ages). Her voice has lowered a bit after a lifetime of cigarette smoking and age, but she's lost none of her power. Her unique phrasing and ever-shifting rhythmic invention brings the listener back to why exactly this recording makes so much sense! She is a jazz singer and always has been. This band lends even more weight to that argument. The nearly seductive interplay between Hancock's and Loueke's six-string fills and her voice is almost erotic.

Luciana Souza's "Amelia" is, while hauntingly gorgeous, the most outside performance on the record. Her voice is closest in some ways to Mitchell's own in timbre, but her way of holding syllables until they melt into the ones that follow adds space and texture to the band's accompaniment. She is one of them, not in front of them. Finally, of course, there is Cohen, the only male vocalist on this collection. He doesn't even try to sing. Instead, accompanied only by Hancock, he recites "The Jungle Line" as poetry. Perhaps because Cohen is a poet as well as a songwriter, he is able to offer a completely new interpretation out of the tune. He allows the words to represent themselves, plaintively reading them as Hancock improvises the melody line, in a modal frame and in a startling array of minor key permutations. River approaches brilliance; it's another accomplishment in a career full of them for Hancock.

The album doesn't simply recontextualize Mitchell. Any fan of hers has known that she never comfortably fit the whole singer/songwriter thing anyway. It actually does that more for jazz and pop. He takes a sound that has been floating around since Jones issued her debut album, and roots it deeply in the jazz camp without giving up the immediacy of sophisticated adult pop -- which is, in a way, an element of the tradition of jazz itself. For jazz fans, this is a wonderful new chapter, a new way to hear him (and Shorter). For pop and Mitchell fans, this is a way to step quietly into another world and experience wonders. This CD was nominated for a Grammy award in 2007 for Best Album, Best Contemporary Jazz Album, and Hancock's improvisation on "Both Sides Now" was also nominated for Best Jazz Instrumental Solo. ~ Thom Jurek, Rovi 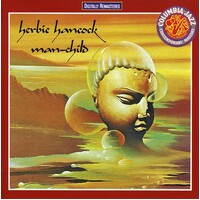