"Featuring PEK on clarinets, alto, tenor & bass saxes, contrabassoon, sheng, game calls, percussion & aquasonic and Glynis Lomon on cello, aquasonic and voice. Considering that Boston-area-based Leap of Faith (various versions from duo to orchestra & several offshoot projects) have more than a 100 discs out on their own Evil Clown label, you might think that I had heard (and reviewed) enough of their vast catalogue, I still look forward to those boxes of 5+ new titles every few months.

Glynis Lomon and Dave Peck are two core members of Leap of Faith having worked together on all of the Leap of Faith releases. Kevin Reilly, cofounder of the Relative Pitch label caught Leap of Faith at a couple of New York locations (at DMG & at Cisco Bradley’s place) and decided to offer LoF a chance to record for RP. The core of Leap of Faith has changed over the years somewhat, the band is most often a quartet or larger. Duo versions are pretty rare so that is what this is. Things begin with the mysterious sound of an acquasonic (or bowed waterphone) and then joined by percussion and what sounds like a melodica. This disc is well recorded and well-balanced. Ms. Lomon is in truly fine form here, bowing intense bent-note, free-music while PEK slowly worked his way through some 14 instruments, one at a time.

At times Ms. Lomon lets loose with her wacky vocal antics with PEK occasionally joining her. Although the duo do get weird at times (w/ occasional odd voices), everything flows organically, nothing is forced. What is wonderful about this is how well these two work together, creating a stimulating dialogue as they go. The main thing I dig about this disc is this: it doesn’t quite sound like other Leap of Faith discs on the Evil Clown label, it sounds warmed and somehow friendlier, never too weird but still immensely creative and exploratory".
.
- Bruce Lee Gallanter, DMG 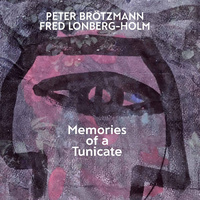