Guitar Solos 4 is a collection of the work of 5 Sydney performers and is the third release on psychopyjama to feature solo guitar - the first being John Encarnacao’s Giraffe Solos and the second being Jo Williams’ Sillage. But rather than a failure of simple arithmetic, the title of the release is a homage to Fred Frith’s series of (three) releases of the 1970s that showcased solo guitar improvisations. Aside from Frith, the other musician hovering over this release is fellow Australian Oren Ambarchi, whose extensions upon the guitar as a device with which to make sound is an influence on some of the music heard here.

Each guitarist chooses their own path, with the use of drone (Ianigro, Bozzetto), technology (Hunter, Bozzetto, Ianigro), melody (Williams, Encarnacao), noise (Hunter, Encarnacao), folk music (Williams), instrument preparation and alternate tuning (Encarnacao) and other aspects. All performances were improvised and recorded at a single evening’s concert. The pieces have been re-sequenced to create a listening flow but otherwise are pretty much as they were performed. 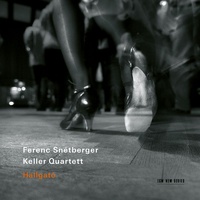