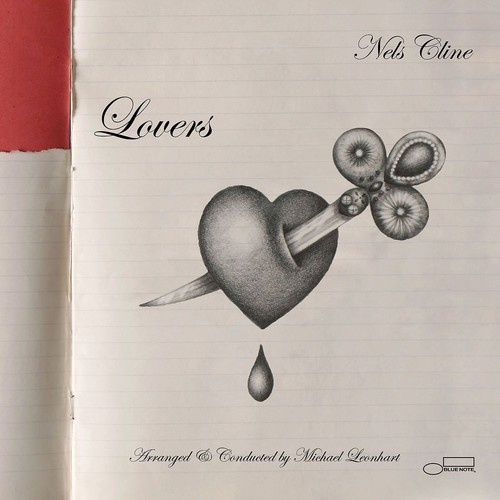 Nels Cline made his Blue Note debut Lovers, an expansive double-album that the guitarist had dreamed of making for over 25 years. Inspired by the likes of Bill Evans, Jim Hall, Gil Evans, Johnny Mandel, Henry Mancini and others, Cline finally realized his ambitious “mood music” project with an ensemble of 23 stellar musicians conducted and arranged by Michael Leonhart. Lovers was produced by David Breskin and recorded and mixed by Ron Saint Germain.

“I have been dreaming about, planning, and re-working my rather obsessive idea of this record for well over twenty-five years, and it was always going to be called Lovers,” says Cline. “It is meant to be as personal in its sound and in its song selection as it is universal in its endeavor to assay or map the parameters of ‘mood’ as it once pertained, and currently pertains, to the peculiar and powerful connection between sound/song and intimacy/romance. In this, I hope Lovers offers something of an update of the ‘mood music’ idea and ideal, while celebrating and challenging our iconic notion of romance.”

The material on Lovers is wide-ranging; the album’s 18 tracks include Cline’s striking originals as well as Great American Songbook standards and songs by Sonic Youth, Arto Lindsay, Jimmy Giuffre and others. Cline will premiere Lovers live at the Newport Jazz Festival on Sunday, July 31, with additional performances at UCLA and SFJAZZ next year. Cline was named by Rolling Stone as one of the “100 Greatest Guitarists of All Time.”

He has led various groups of his own, most consistently the avant-garde ensemble the Nels Cline Singers, and appeared as a guest or feature player on more than 200 albums. In addition, for the last dozen years, he’s been a full-time member of the acclaimed rock band Wilco.