By 1961 Ray Charles had established himself at the forefront of popular music. He had several R&B hit singles on Atlantic Records in the fifties and crossed over into the mainstream with his hit "What'd I Say" in 1959. He then moved from Atlantic Records to ABC and had further success throughout the sixties. The two concerts on this DVD were filmed at the Antibes Jazz Festival in July of 1961 when Ray Charles was at the peak of his powers. Filmed on 16mm film it has been lovingly restored and is released here for the first time. 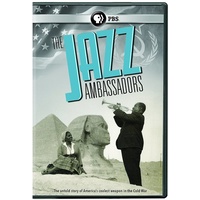