The timeless "Way out West" established Sonny Rollins as jazz's top tenor saxophonist (at least until John Coltrane surpassed him the following year). Joined by bassist Ray Brown and drummer Shelly Manne, Rollins is heard at one of his peaks on such pieces as "I'm an Old Cowhand (From the Rio Grande)," his own "Way out West," "There Is No Greater Love," and "Come, Gone" (a fast stomp based on "After You've Gone"). The William Claxton photo of Rollins wearing Western gear (and holding his tenor) in the desert is also a classic.

"Suddenly I was in a room with Rollins and Shelly Manne and Ray Brown. It was a shipping room with records stacked on shelves all around the musicians, but I wouldn't know that until many years later.

The song was, improbably, "I'm an Old Cowhand," and it began with Shelly Manne striking a woodblock in the right channel, and the blows carried in a perfectly defined acoustic space that included me. Then Rollins' tenor sax came in, so real in the left channel that I believed I could walk up and touch it. Deadpan, Rollins bit off the notes of Johnny Mercer's cowboy melody, the details of his pronunciation audible in his reed, now raspy, now clarion-clear.

The label was Contemporary, and the back of the album jacket said, "Recorded at Contemporary's Studios, Los Angeles. Produced by Lester Koenig. Sound by Roy DuNann." What made the sound truly astonishing was the recording date: March 7, 1957." 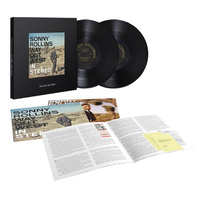 The Comet Is Coming - Trust In The Lifeforce Of Th