"...run wild to get the most out of their art, while maintaining a coherent vibe throughout this set of extemporaneous compositions..." - S. Victor Aaron, Something Else! Review

Trapper Keaper centers around a unique connection shared by Italian drummer Marcello Benetti and keyboardist William Thompson IV (aka WATIV), freely improvising sonic textures, with an extended number of music influences steeped in the music and culture of New Orleans, where they call home. Some would describe Trapper Keaper as the wild child between Miles Davis’ Bitches Brew and Beastie Boys’ Paul’s Boutique. As a duo Trapper Keaper operates as a fearlessly funky rhythm section, pairing themselves with one-to-several all-star guest artists for each gripping show. Trapper Keaper exists in a state of change with a revolving cast of a guest performer(s) which stoke the fire of the band's musical journey.

On the upcoming release (via ears&eyes Records), Trapper Keaper ignites with two of the most important current improvising visionaries and friends, Aurora Nealand (alto sax, accordion, various percussive elements & screaming) with her eclectic and always unexpected sonic procurements and Tim Berne, master of alto saxophone, with his precise and now legendary language and angular melodic expressions. The album takes you through sonic soundscapes including the first seconds of the album with yelling, as well as hard-to-pin-down-what-exactly-that-sound-is moments, with whistles, accordion, sub-bass synth throbs and of course, dazzlingly dramatic solos from both saxophonists. It truly is an aural adventure and with the ability to instantly lose yourself in the sound. Trapper Keaper is poised to continue their rapid growth as proclaimed ambassadors of spontaneously and collectively composed music on this and future releases. This is one not-to-miss by any means.

This particular release rightly entitled, ‘Meets Tim Berne & Aurora Nealand’, Trapper Keaper allows that having these two folks in the studio with them might lead to something they’ve never quite experienced; that’s the good thing about playing free with folks with enormously open ears and willingness to explore wherever they may go. Normally TK describes themselves using the word “funky” but it might be a bit deceiving as this record takes an often darker turn (and not for the worse, but for the expressiveness). 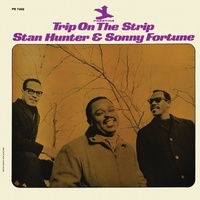