As a branch of the then-young Island label, Sue Records put out over 100 singles in the U.K. between 1963 and 1968, most of them American soul tracks licensed for the British market, with some blues and early rock & roll/R&B thrown in as well. This is a compilation of 30 tracks that appeared on Sue 45s, and like the Sue release schedule, it's weighted heavily toward '60s soul, with a bit of blues and R&B too, a few of the tracks dating from before Sue's actual 1963 launch (indeed, one, Elmore James' "Dust My Blues," goes all the way back to 1955). As for the possibly confusing subtitle of the CD, the label was run by Guy Stevens, more famous for later producing Free, Mott the Hoople, and the Clash, but in the mid-'60s known as one of Britain's foremost soul/R&B collectors and club DJs. Although this anthology contains much good music and is a representative sampling of Sue's output, it's a bit of an inconsistent listen for those not particularly interested in the Sue tie-in, drawing from all over the map of American soul/R&B/blues. There are some classic hits (in the U.S. at any rate; they were cult items in the U.K.) of varying size, like Inez & Charlie Foxx's "Mockingbird," Chris Kenner's original version of "Land of 1,000 Dances," Ike & Tina Turner's "I Can't Believe What You Say," and Bobby Parker's great overlooked, ahead-of-its-time early (1961) soul outing "Watch Your Step." There are also some excellent tracks known these days primarily to collectors, like Baby Washington's lush early soul ballad "That's How Heartaches Are Made," Derek Martin's raucous "Daddy Rollin' Stone" (covered by the Who on the B-side of their second U.K. single), Wilbert Harrison's 1962 single "Let's Stick Together" (which he remade for his 1970 hit "Let's Work Together"), and the Olympics' 1962 dance number "The Bounce." the James Hunter Six - Hold On 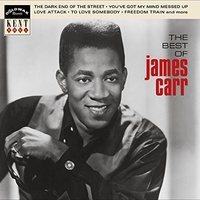