On October 15, 1965, tenor saxophone master and composer Wayne Shorter recorded The All Seeing Eye, a brilliant and ambitiously multi-layered album for Blue Note. Shorter's goal for the album was to use "a wider range of colors and textures" while continuing his explorations of "life and the universe and God." Joining Shorter in his quest are Freddie Hubbard on trumpet, Grachan Moncur III on trombone, James Spaulding on alto saxophone, Herbie Hancock on piano, Ron Carter on bass, Joe Chambers on drums, and, on one track, Wayne's brother Alan Shorter on flugelhorn.

The Blue Note Tone Poet Series was born out of Blue Note President Don Was' admiration for the exceptional audiophile Blue Note LP reissues presented by Music Matters. Was brought Joe Harley (from Music Matters), a.k.a. the "Tone Poet", on board to curate and supervise a series of reissues from the Blue Note family of labels.

Extreme attention to detail has been paid to getting these right in every conceivable way, from the jacket graphics and printing quality to superior LP mastering (direct from the master tapes) by Kevin Gray to superb 180 gram audiophile LP pressings by Record Technology Inc. Every aspect of these Blue Note/Tone Poet releases is done to the highest possible standard. It means that you will never find a superior version. This is IT.

The All Seeing Eye
Genesis

Chaos
Face Of The Deep
Mephistopheles 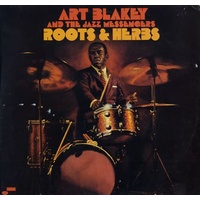