Whit Dickey has been a quiet but brilliant presence on the New York avant-jazz scene since his discographical debut in 1991 on the legendary Matthew Shipp Trio album, Circular Temple (1992). In concert and on recordings in groups led by Shipp, David S. Ware, Ivo Perelman, Joe Morris, and Rob Brown, he built a reputation for distinctively space-filled, subtle rhythmic support, even as he was perfectly capable of muscling up when the music called for it.

For some of the people he plays with, three decades yield dozens of releases as a leader, but the present release -- his first on ESP-Disk' -- is just Dickey's 13th at the helm after one in the '90s, seven in the '00s (including groups The Nommonsemble and Trio Ahxoloxha), and four in the recently concluded decade. The musician Dickey has most frequently teamed with is Shipp, and here they are again in a pair of contexts, the first disc a duo, the second a trio with the addition of Nate Wooley.

ESP-Disk' quickly understood why Dickey has released relatively few albums as a leader: he is incredibly demanding of himself. There were multiple sessions by each configuration heard here, not to mention a quartet as well; Dickey kept going back into the studio, pushing himself to greater heights until he was finally satisfied. 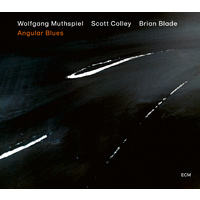