Critics often complain that small-group sessions comprised of members of the Duke Ellington Orchestra are somewhat disappointing; this is definitely not the case with this session led by Clark Terry, recorded during a 1959 tour of Europe in the final month of the trumpeter’s almost eight-year tenure with the band. Fellow Ellington sidemen Paul Gonsalves, Jimmy Woode, and Sam Woodyard are present, along with Raymond Fol at the piano.

Terry was one of the most gifted trumpeters to grace the Ellington band and he blossoms when he has more opportunities to solo in a small group setting like this one. Gonsalves proves to be the perfect foil for Terry as they trade lines on several of the numbers. Unlike many dates led by Ellington veterans, this one doesn’t rely heavily on songs from the vast Ellington songbook; instead, Terry includes only ‘Satin Doll’, a Monk’s tune, one by Babs Gonzales and three of his own compositions, with ‘Serenade to a Bus Seat’ (a remake of his upbeat instrumental interpretation of the hectic life of a touring musician) proving to be the most memorable.
This studio date was recorded for French Decca label and was almost impossible to find until now. 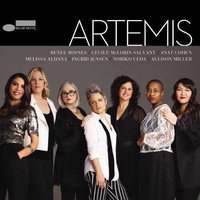